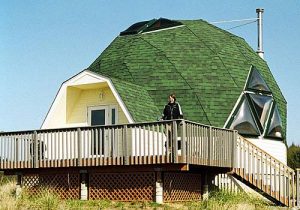 Round houses have existed for several thousand years, mostly in the culture of peoples who were limited in the amount of building materials and had to think first and foremost about the protective properties of the house. A sphere is the most efficient form of matter existence, because it allows for the largest volume of matter with the smallest surface area. This means that the energy cost of sphere existence is minimal. The surface tension of a sphere is powerful enough for a sphere to resist impacts and pressure of any power.

Where and when did the first round houses appear?

Spherical houses first appeared in the culture of the Eskimos of Greenland and Canada. The construction of the domed house has become preferred in the harsh conditions of the permafrost, as only ice and snow were used to build the Igloo house.

First, a circle, the basis of the future circular building, was made of ice blocks. Then, bricks of the second tier with a radius smaller than the first were put on the first ice blocks. Gradually a round house was built, all cracks were filled with snow and water. Despite the primitiveness of the technology, such a house perfectly preserved heat, was not afraid of heavy snowfalls, winds and blows.

Nowadays, not many companies that offer turnkey home construction will agree to build you a round house. Construction of a dome house involves atypical calculations and documentation, which differs from the standard documents for rectangular houses. We specialize in the construction of round houses, perfectly know the technology of their construction and we build really high quality and comfortable homes.

Our round house differs from conventional houses by its good energy efficiency and interesting appearance. Since the surface area of a round house is about 30% less than that of a similarly sized «square» house, 30% less heat escapes through the walls. This allows you to reduce the cost of maintaining a comfortable temperature and quickly recoup the money invested in the construction of the house. Since the surface area of the house is smaller, it will take about 25% less materials to build than would be needed to build a similar volume «cube». But in order to achieve savings, you need to have experience in building such structures.

A roundhouse is built very quickly: only 2-3 months, depending on the size of the house. First a small foundation is poured, then a wooden frame is installed and it is clad with special panels. All this happens quickly and without the use of special equipment, for construction of a round house a small team of experienced workers and scaffolding material are enough.

The main advantage of dome construction: when you wonder how much it costs to build a round-shaped house, we can surprise you. Since you do not need to pour a powerful foundation and separate materials for the roof, use sophisticated construction equipment and dozens of workers, the construction of a dome house at a cost almost does not exceed a similar in area rectangular house. By the way, in the future you will save on repairs, because you do not have to worry about problems associated with a leaking roof or damage from strong winds or hail.

Stable and sturdy construction will withstand any weather and keep you and your belongings safe.

Well, you can’t forget that a domed house will be dramatically different from other houses on your street and even in your city. Spherical houses are not very common, so your house will immediately attract attention, and showing it to guests is a pleasure.

If you are interested in the proposal for the construction of a dome house — write to us, and we will answer all your questions.