How to build a geodesic house • Dome4home 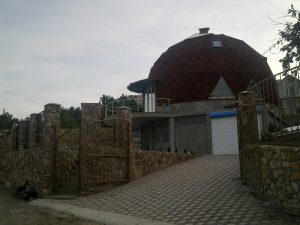 Geodesic dome is a kind of sphere-shaped structure, which is becoming increasingly popular due to rising prices of construction materials and utilities. The dome allows you to save quite a lot of money if you compare it to a similar-sized traditional house. Why haven’t domes become popular yet if they are so good? People don’t really want to stand out from the crowd, they are more attracted to conventional houses that are just taller than their neighbour’s. But those who don’t just want a nice house, but a nice, cheap and nice one, have already ordered a dome construction.

What is a geodesic dome and how to build one

Savings begin at the first stages of construction.Instead of pouring a heavy and well-calculated foundation, you simply need to clear and level the site for the geodesic house. The house consists of a frame and external cladding. About 30 per cent of the house’s weight is in the frame, which is made of timber for residential domes. Due to the low weight of the entire structure and its stability, the dome does not require a strong foundation. This means construction is completed faster and the owner will not spend a lot of money digging shallow trenches and pouring a light foundation.

Building a dome is quick

The construction of a geodesic house is also quick. Instead of laying neat brick walls, workers simply join the timbers together. Once the entire structure has been installed, a huge advantage is revealed — self-supporting. That is, you don’t need load-bearing walls or internal columns to support the house. The structure stands perfectly by itself, it does not show the slightest deformation during a strong wind.
Then we panelize the frame with sandwich panels with insulation, lay the communications and make the interior cladding of the house. At this stage also distinguishing features of the hemisphere are shown. First, with the same effective area of a sphere and a cube, the former has a smaller volume and a smaller surface area. This means that you will need 20% less building materials than if you were building a «box». And it also means that heat exchanges with the environment are 30% slower, which saves about the same amount of energy on heating a dome house. And the winds go around the dome and don’t cool the walls as much if you compare geodesic houses with conventional «square» houses.

The aerodynamic shape also guarantees better resistance to all kinds of snowfalls, storms and other natural disasters. A prime example is the hurricane on the US West Coast, which never managed to damage dome houses. The design of a geodesic house can be created with structural reinforcement — then the house will be able to withstand any forces of the elements.

If you are interested in the construction of houses in the form of a dome, you can fill out an application. Then you will be contacted by a manager with whom you will discuss all questions.