Features of the domed house •  Dome4home 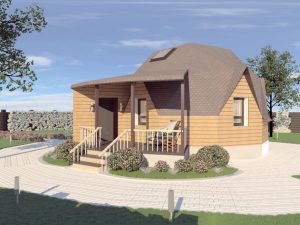 Dome construction first originated in Eskimo architecture. They were forced to build their homes in a ruthless economy of building materials, using only self-made bricks made from snow and ice. They are stacked on top of each other with the support of three neighbouring blocks.

The hut, called an igloo, grows rapidly, with its single wall looking more and more like a perfect spherical dome. Our construction technique is similar to the Eskimo tradition, but unlike them we build domed houses much larger and using modern materials.

The first feature of a dome house is its layout. Dome design is self-supporting, and all internal partitions and walls will serve purely decorative purposes and conveniently divide the space into rooms. Quite tall houses often ask for a first floor with a spiral staircase. The first floor is usually the bedroom, and sometimes we get requests for a circular window right at the top of the dome — it’s hard to imagine anything more calming than lying on a bed and looking up at the stars. The free-form layout options are particularly appreciated by creative people who have their own vision of the ideal home.

The second characteristic of the domed house is economy. When dome houses existed only in the stage of projects and single constructions, their construction was unreasonably expensive. Technology evolved and we learned how we could use new materials and construction methods to build a dome for a minimum amount of money and in the shortest possible time. We built our first house in 2006 and since then we have been gaining experience and improving our skills so that now we can say — you can save up to 20% of the material used to build a box of an identical volume.

The third feature is savings on utilities. Since the shape of the sphere is the most energy efficient, you can maintain an optimal temperature inside the dome house by spending less energy on heating. Some of our customers report heating savings in the region of 60%. Also, the right window configuration can reduce your lighting costs, and sunlight can additionally heat your home.

The fourth feature is ease of installation. Even the largest domes can be easily installed by a team of workers without the use of special equipment such as cranes or excavators for excavation. No debris or broken bricks are left on the construction site and your yard will not be damaged by wheels or caterpillars.

The fifth feature is the strength of the construction. Our dome house withstands heavy loads, shocks, pressure and wind gusts. Calculations and tests showed that the walls can withstand pressure of up to 700 kg per square metre and withstand a wind speed of 250 km/hour. The load on the roof from snow rarely exceeds 200 kg per square metre, and even the strongest hurricanes can barely reach speeds of 200 km/hour. One last fact about resilience — it was the Japanese who pioneered dome construction, even when the technology was very expensive.

And the sixth feature — we do not build only for clients. The first houses were built in 2006 for the company’s management, who studied and improved the construction technology. If you want to know more details about dome construction — write us your question and we’ll respond quickly.