Read about the basics of dome construction in our blog • Dome4home 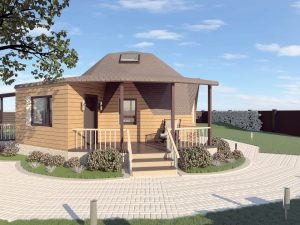 A dome is an object in architecture that contains a sphere. Domes can often be found in Eastern architecture, they are topped by churches and cathedrals, sometimes domes are used in commercial buildings and simple street structures such as stops and stalls. In Europe, domes are found in ancient Roman and Greek architecture. For example, the Greek amphitheater uses the shape of a sphere to optimally position the audience and achieve good acoustics. But why are domes so widely used in construction?

The first domes in the world

The pioneers of modern construction using domes were the Japanese. Because of constant earthquakes, Japanese architects have to be very careful about how houses are built in order to ensure their resistance to seismic vibrations. The Japanese decided to increase the number of walls to strengthen the structure, and additionally provide each wall with a support. First there were beveled rectangles similar to a trimmed pyramid, then hexagonal slab structures, and only in the 2000s the first wood-framed dome house and dome house made up of separate semicircular segments were created.

The trend began to spread around the world, domed houses came up in rich countries like South Korea and the UAE as a fashionable gimmick. Then the construction technologies got a little cheaper, companies started to develop affordable ways of construction and make their way to the market. In Europe and the CIS countries decided to develop their own construction technologies, and thanks to this the dome building in Ukraine was replenished by a number of excellent companies. We have been building dome houses since 2006 and we do it professionally.

Our first house was not a simple order — the director of the company decided to see for himself that it was really comfortable to live in a half-sphere house. In a few months we finished the house, and the director settled in a few weeks later, as soon as the furniture was delivered. By the way, in a domed house fit any furniture — the curvature of the walls is insignificant on the length of a meter or two, so your favorite closet or bed without problems can be set against the wall. The director worked on the new house, looking for its weaknesses and ways to improve the design to make it cheaper for customers. A long 10 years of research and experimentation led to a result we can be proud of. Savings on building materials compared to an identical square footage» house — 20%, thermal insulation saves up to 60% of energy for heating.

A domed house with a beautiful design

In parallel with researching more efficient methods of erecting the dome, we set out to develop a beautiful design for our homes. We found a unique approach to the natural lighting of the house and were the first to install circular windows right at the top of the sphere, which provides even lighting for the entire house. We stopped chasing after pompousness and oversaturation with details, and use calm colors and ecological materials such as bunks, block-houses and imitation beams. And the exterior design of the houses is also diverse — different roofing materials, the shape and location of the windows, additional entrances. If you would like to look at finished projects leave a request and we will answer any questions you may have.