Buy a domed house in Europe at the best prices • Dome4home 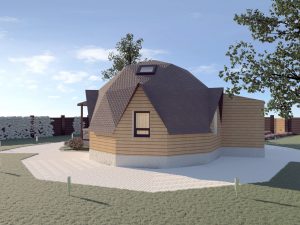 Dome houses are a new phenomenon in architecture. Domes first began to be built in the north, round structures are built out of snow and ice and are known as «igloos. A strong hemisphere is assembled from round bricks, which is additionally watered and then withstands snowfalls, strong winds and even children who play on the surface of the house. And in other cultures domes have long been used for decorative purposes: churches, mosques, palaces, chapels and other architectural monuments often have a hemisphere. But lately, domes can be found all over the world.

Where dome houses are sold for the first time

The Japanese were the first to use domed houses in residential construction. They conducted their own research to find the optimum building shape to withstand a strong earthquake. Conventional «boxes» quickly collapse during seismic vibrations of average strength — load-bearing walls split apart, the roof warps and falls, and a strong foundation does nothing to save the situation. And domed buildings are well resistant to earthquakes, shocks and other types of physical impact. Many Japanese wanted to buy a geodesic domed house after the experimental structures have survived earthquakes.

Unlike the Eskimos, we are not constrained in our choice of building materials. We can use wood to build the frame and wood for cladding. The first method is the easiest and most economical, and also allows you to build a dome house without the need to lay a strong foundation under the house. There is no need to use thick and strong load-bearing walls — the whole dome is a solid load-bearing wall with an evenly distributed load. As a consequence, the internal layout can be anything to please your taste. No load-bearing walls — you can leave one huge round room or divide it into several smaller rooms. And in high domes (from 5 meters), you can add a second floor installed under the dome.

The free layout can also include the freedom of arrangement of windows and doors. You can even order a full glass dome or its top, place the bed on the second floor and literally sleep under the stars. The location of the doors is up to you, too — put the exits where you feel most comfortable. And you can also combine the domes with other geometric shapes, such as cylinders and parallelepipeds, to give the geo house an original design.

Additionally, our dome homes have a positive impact on their inhabitants. Research by psychologists and surveys reported that those who bought a domed house , quickly restore mental health, are less susceptible to stress and depression. The reason is the absence of corners in open rooms — the human subconscious does not associate such a room with a «box», and tells the brain that the person is now under the open sky. And engineers point out that in a round house air circulation occurs in a more «natural» way, so residents are always breathing fresh air of normal temperature. And even and deep breathing allows you to calm down and save your nerve cells. If you are interested in the positive properties of dome houses — write to us and we will share all the interesting information with you.